BEIJING — When a projectile struck a Hong Kong woman in the eye this week as protesters clashed with the police, China responded quickly: Its state television network reported that the woman had been injured not by one of the police’s bean bag rounds, but by a protester.

The network’s website went further: It posted what it said was a photo of the woman counting out cash on a Hong Kong sidewalk — insinuating, as Chinese reports have claimed before, that the protesters are merely paid provocateurs.

The assertion was more than just spin or fake news. The Communist Party exerts overwhelming control over media content inside China’s so-called Great Firewall, and it is now using it as a cudgel in an information war over the protests that have convulsed Hong Kong for months.

In recent days, China has more aggressively stirred up nationalist and anti-Western sentiment using state and social media, and it has manipulated the context of images and videos to undermine the protesters. Chinese officials have begun branding the demonstrations as a prelude to terrorism.

The result, both in mainland China and abroad, has been to create an alternate version of what, seen from Hong Kong, is clearly a popular demonstration movement. In China’s version, a small, violent gang of protesters, unsupported by residents and provoked by foreign agents, is running rampant, calling for Hong Kong’s independence and tearing China apart. 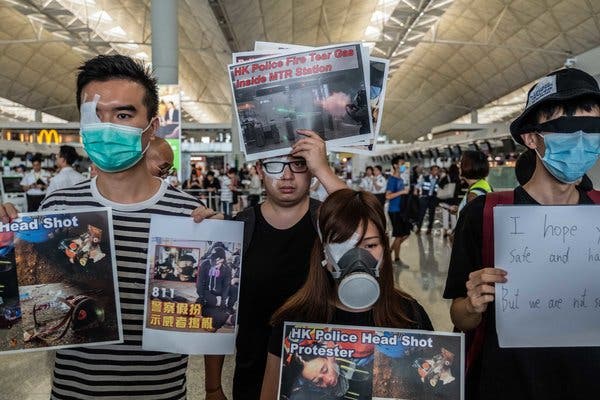 This narrative almost certainly reflects that of the country’s leaders, including Xi Jinping, and it is fueling misunderstanding — and, increasingly, anger — among the Chinese public. That could, in turn, raise pressure on the government, increasing the risk of an overreaction or miscalculation based on limited or inaccurate information.

People posting on Weibo, a Chinese social media service similar to Twitter, are increasingly calling for Beijing to act. “Beating them to a pulp is not enough,” one person said about protesters on Tuesday, echoing an increasingly common sentiment on Weibo. “They must be beaten to death. Just send a few tanks over to clean them up.” 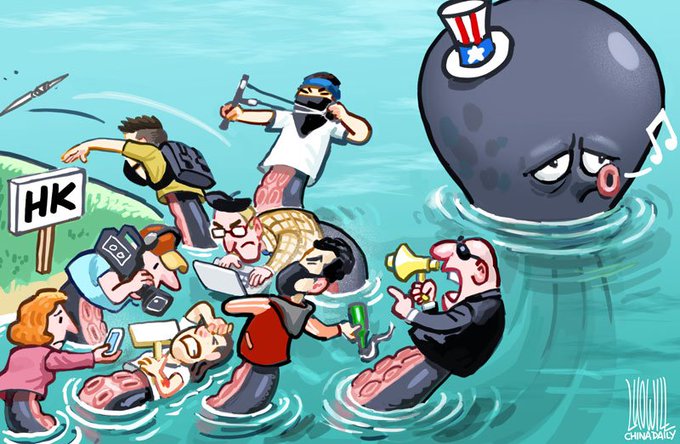 Since China’s censors have the ability to quickly remove offending comments, the abundance of them suggests that the government is willing to tolerate the warning they deliver, however ominous it sounds.

China has long curated the content that it allows its citizens to see and read. Its new campaign has echoes of tactics used by other countries, principally Russia, to inundate domestic and international audiences with bursts of information, propaganda and, in some cases, outright disinformation.

“Propagandists observe each other across borders, and they learn from each other,” said Peter Pomerantsev, the author of “This is Not Propaganda,” a new book that describes how authoritarian governments have weaponized social media that were once hailed as harbingers for democratic ideals.

The disinformation has clearly been aimed at undermining sympathy for the Hong Kong protesters’ goals, which now include demands for greater democratic freedoms for the territory’s seven million residents.

Propaganda in the traditional sense, Mr. Pomerantsev said, would try to win over an audience, while disinformation is meant simply to sow confusion and fuel conspiracies.

“You have to smother everything with doubt, and conspiracy is very effective in creating that,” Mr. Pomerantsev said in a telephone interview.

Though China’s disinformation network has received less global attention than Russia’s, the country’s officials have, over the last decade, built a machinery of online controls that far exceed any other country’s.

Many overseas websites are blocked in China. Censors embedded within its internet companies delete anything unacceptable. The police have arrested people who speak out of turn in chat groups, or who share sensitive content online.

The state media — whose history of propagandizing stretches back to Mao Zedong’s era — have also made powerful inroads in the new media online, filling the mainland’s information vacuum with an officially Sinicized worldview.

Hong Kong, which Britain returned to Chinese rule in 1997, remains outside China’s firewall, and thus is sitting along one of the world’s most profound online divides. Preserving the city’s freedom to live without the mainland’s controls has become one of the causes now motivating the protests.

“Deep inside, mainlanders and Hong Kong people have very different life experiences and emotions,” said Fang Kecheng, an assistant professor of journalism at the Chinese University of Hong Kong. “Without the shared emotions, it’s not easy for mainlanders — even those who can freely access information — to empathize with Hong Kong people, which is an important explanation for how the government has been able to create a parallel universe of narratives.”

China’s new aggressiveness in the effort represents a shift in tactics. When large protests erupted in June over the Hong Kong government’s proposed law allowing the extradition of criminal suspects to the mainland, China’s state media — and officials — largely ignored them.

That changed on July 1, when protesters stormed Hong Kong’s Legislative Council building after a day of peaceful demonstrations. A flurry of articles and editorials in China’s state media followed, condemning the vandalism and violence — without explaining what the protesters were protesting about.

Since then, the state media have vigorously defended the police in Hong Kong, belittled the protesters and accused Westerners of orchestrating the turmoil. Efforts to contextualize the situation or express sympathy for the protesters were swiftly purged from social media.

The propaganda campaign intensified after July 21, when protesters surrounded the Chinese government’s main office in Hong Kong and threw black ink on a government emblem. And when a Chinese flag was thrown into Victoria Harbor on Aug. 3, the reaction in China — at least online, stoked by state media — reached a fevered pitch.

“The five-star flag has 1.4 billion guardians,” CCTV wrote indignantly to its 87 million followers on Weibo. “Repost! ‘I am a guardian of the flag!’ ”

It was reposted by more than 10 million people, including Jackie Chan, the Hong Kong martial arts film star. On Twitter, which is banned in China, the People’s Daily later reposted CCTV’s original post, giving it an international audience.

Just across the border from Hong Kong, in the city of Shenzhen, the Chinese security forces have conducted large-scale operations in recent days, in a nationalistic display that got prominent coverage in the state media.

Other media reports have been outright deceptive. A video appeared on Monday showing a protester with a toy weapon used in Airsoft — a Paintball-like game that is popular in Hong Kong. The China Daily, a newspaper of the Communist Party, circulated it widely as evidence that the protesters had taken up arms, identifying the toy as an M320 grenade launcher used by the United States Army.

“What is the difference between this and the terrorists!” read one reply. “How long must we tolerate this?”

“What Is America Up To?” has become a hashtag promoted by CCTV on social media, according to Manya Koetse, the editor of What’s On Weibo, a site that monitors trends on the platform. Other posts celebrate the Hong Kong police as embattled heroes, while Hong Kong residents are regularly portrayed as spoiled.

The yawning power imbalance, from an information-warfare point of view, has frustrated many protesters as they try to outline their demands and clarify what has actually happened in the streets.

During a peaceful sit-in at Hong Kong’s airport late last month, protesters sought to explain their demands to arriving passengers, including travelers from the mainland. But the Chinese media promoted a video of a few protesters harassing a white-haired traveler who had ripped a poster out of a demonstrator’s hands.

“Witness said the old man refused to take leaflet demonstrators gave out. I think old people don’t deserve this no matter what is the reason,” the editor of The Global Times, Hu Xijin, wrote on Twitter, with a video that only showed protesters confronting the man.

“These young people have lost all compassion for political frenzy,” he added.

Steven Lee Myers is a veteran diplomatic and national security correspondent, now based in the Beijing bureau. He joined The New York Times in 1989, and has previously worked as a correspondent in Moscow, Baghdad and Washington.

Paul Mozur is a technology reporter based in Shanghai. Along with writing about Asia’s biggest tech companies, he covers cybersecurity, emerging internet cultures, censorship and the intersection of geopolitics and technology in Asia.

In China, video of deadly accident reignites debate over lack of...

What Is Filial Piety?

China #MeToo: Why one woman is being sued by the TV...

ABOUT US
Followcn is about China, its people, history and culture, values, concerns and difficulties, dreams and hopes, and how the world sees and thinks about it.
Contact us: [email protected]
© Copyright 2017 All Rights Reserved