She was known as China’s clickbait queen, an irreverent blogger who prescribed shopping to combat sadness (“better than sex, orgasms, strawberry cake”) and makeovers to win back cheating husbands (“men are visual animals”).

But late last month, Ma Ling, a blogger who commanded an audience of more than 16 million people, went conspicuously silent.

In the battle for control of the Chinese internet, the authorities had designated Ms. Ma a threat to social stability, pointing to an article she published about a young man with cancer whose talent and virtue were not enough to overcome problems like corruption and inequality.

The state-run news media accused Ms. Ma of circulating false information, and her social media accounts were wiped from the internet.

The silencing of Ms. Ma, better known in China by her pen name, Mimeng, reflects a broader campaign by President Xi Jinping to purge the public sphere of popular voices that the ruling Communist Party finds threatening, no matter how innocuous they may seem.

“There is no longer any freedom of speech in China,” Jia Jia, a blogger who writes about history, said of the campaign. “In the end, no one will be spared.”

Since coming to power in 2012, Mr. Xi has imposed the most extensive censorship in China in years, flooding the airwaves with communist propaganda and reining in investigative journalists and social media celebrities.

Now Mr. Xi is pushing to tame one of the most vibrant corners of the Chinese internet: the more than one million self-help gurus, novelists, sportswriters and other independent writers who make up the so-called “self-media.” 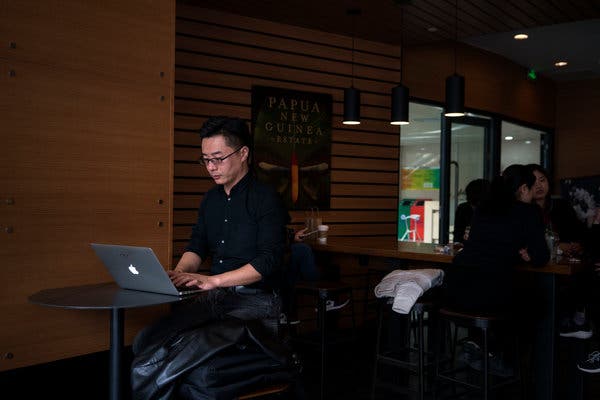 Since December, the authorities have closed more than 140,000 blogs and deleted more than 500,000 articles, according to the state-runnews media, saying that they contained false information, distortions and obscenities.

The party seems concerned that independent commentators, who have become a primary news source for China’s more than 800 million internet users, are drowning out its propaganda messages. It also probably worries that independent media sources could help fuel social unrest in 2019, a year of politically sensitive anniversaries including 30 years since the crackdown in Tiananmen Square.

But Mr. Hu said the risk of unrest might actually increase if individuals were not permitted to air grievances online. “Our society should allow multiple voices,” he said. “Only in this way can discontent be released.”

Such blogs represent one of the last bastions of relatively free discourse in China and have proliferated in recent years as the state-run news media has become more heavily focused on praising Mr. Xi and his policies.

For many writers, blogs are a lucrative business, with readers paying small fees for content and advertisers paying for mentions of their products. To avoid China’s strict laws on news gathering, many bloggers occupy a gray area, framing their views on current events as commentary.

The freewheeling competition for eyeballs has led to an alarming rise in fake news, a concern that the government often uses to justify its crackdown.

But Mr. Xi is targeting much more than false information. The authorities have blacklisted writers who traded celebrity gossip, analysts who discussed rising property prices and advocates who wrote about problems in the countryside.

In interviews, bloggers described the silencing of Ms. Ma as a clear warning to independent media in China: The party is in charge, and writers must play by its rules.

But while the range of banned topics in China was once clear — independence movements in Tibet and Taiwan, and the bloody crackdown in Tiananmen Square in 1989, for example — the party’s red line has become much more ambiguous.

China’s trade war with the United States is now considered sensitive. So too, sometimes, are musings about the futility of work, a theme often derided by censors as promoting “slacker culture.”

Li Yongfeng, who runs a popular book review channel, said he avoided publishing articles that mentioned social movements or past or present political leaders, even to offer praise.

“The Chinese government always sees itself as a serious father,” he said. “He always wants to control his people and to determine what they like and dislike.”

Mr. Xi has demanded absolute loyalty from state-run news outlets, saying their names should include the word “party.” And he has urged officials to take command of new media by deploying tools like blogs and apps to promote communist ideology.

Lotus Ruan, a researcher at the University of Toronto who studies the Chinese internet, said she expected censorship to grow as the rules became more arbitrary.

“At the end of the day, it is up to authorities to decide what constitutes ‘positive energy’ and what does not,” she said.

An account that focused on women was suspended last year after the authorities said its posts on sexual health were “distasteful.”

Similarly, an account run by a nonprofit named NGOCN was shut down in December after it published articles on a chemical spill in eastern China, said Wu Lilan, the group’s executive director.

Increasingly, the party is seeking to limit content that depicts life in China as a constant struggle. That seems to have driven the attacks on Ms. Ma, the clickbait queen.

Ms. Ma, 42, already had detractors who accused her of making money by manipulating people’s emotions with articles like “I Love Money, It’s True” and “Men Don’t Cheat for Sex.” She charged $113,000 to advertisers for a mention on her blog and bragged about paying her interns nearly $90,000 a year.

In January, Ms. Ma, a former journalist who started her blog in 2015, came under attack after publishing “The Death of a Top Scorer From a Poor Family,” a post about a hardworking 24-year-old man who died of cancer. The article suggested that even though the man was bright and virtuous, he was still powerless in the face of the high cost of health care.

The article was widely circulated online and prompted debate about China’s wealth gap, surging medical costs and the value of education — common complaints of China’s middle class. Soon, however, internet users pointed to factual errors and said the piece had been invented.

Ms. Ma had to apologize and promise to “communicate values with more positive energy.”

But the government did not relent. People’s Daily, the flagship newspaper of the Communist Party, accused Ms. Ma of manipulating public opinion. Her social accounts were deleted on Feb. 21.

Ms. Ma did not respond to a request for comment, nor did the Cyberspace Administration of China.

Wang Yongzhi, an outspoken commentator in the eastern city of Hangzhou, said the broader problem was that China’s leaders paid little attention to social issues, leaving a void that bloggers helped fill.

Mr. Wang said he had begun blogging because it provided a “seed of journalistic freedom” in a tightly restricted society. But on Jan. 1, he said, he closed his WeChat blog because he had grown tired of the constant battle with censors.

“It is becoming unbearable,” Mr. Wang said. “The party simply can’t tolerate anyone who has a big influence on society.”