The founder of a prominent Chinese civil and human rights website has been sentenced to five years in prison for inciting state subversion, according to human rights organisations.

Liu Feiyue created and ran the Civil Rights and Livelihood Watch website, which covers a range of rights issues including protests, police abuses and government corruption – sensitive topics that are scrubbed from most Chinese media sites.

The Suizhou intermediate people’s court in central Hubei province sentenced him on Tuesday after he was found guilty of “inciting subversion of state power”. 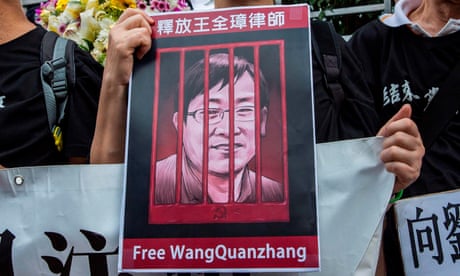 According to Liu’s family members, one of whom was allowed to attend the hearing, the activist shouted at the end of his hearing: “This is political persecution!” He was then dragged out of the court room.

“We think the verdict is unfair. It’s political persecution. He is charged of inciting subversion of state power, but he is not. He just helps petitioners,” said Ding Qihua, Liu’s mother.

Liu’s website published information on human rights abuses, specifically the abuse of activists in psychiatric facilities where authorities often send dissidents, as well as the cases of workers, farmers, teachers, and residents evicted from their homes.

Liu’s sentence came one day after human rights lawyer Wang Quanzhang was handed a four and a half year sentence on similar subversion charges. Wang is one of more than 200 lawyers and activists who were swept up in a 2015 crackdown aimed at courtroom critics of Communist authorities.

“The sentence … once again shows how the Chinese government abuses the judicial system to silence dissidents,” said Patrick Poon, a China researcher at Amnesty International. There were “serious flaws in the procedure of this case, without due process in line with international standards”, he added.

According to Chinese Human Rights Defenders (CHRD), Liu was detained in November 2016 and was not granted a meeting with his lawyer for half a year. Police also harassed his lawyers, disbarring one that his family had hired. Authorities have also pressured his family to convince Liu to confess.

“The prosecution’s case against Liu Feiyue should have been thrown out because authorities deprived him of his due process rights, including the right to a fair and public trial by an independent court and access to a lawyer,” CHRD said in a statement.

Arrested in 2016 for “leaking state secrets”, Huang has since been held in a detention centre in south-western Sichuan province and was expected to go on trial earlier this month. Liu was detained at about the same time, according to Poon.

“Prosecuting the editor of a human rights website shows just how frightened the Chinese government is about independent reporting on abuses from inside China,” said Yaqiu Wang, a China researcher at Human Rights Watch, in a statement on Liu’s sentence.

The demographic timebomb that will hit the Chinese economy