Videos have emerged online showing hundreds of China’s Hui Muslim minority protesting against a government decision to demolish a new mosque, which officials say was built without proper planning approval.

Construction of the Weizhou Grand Mosque in the Ningxia Hui autonomous region finished last year, however local authorities earlier this week issued a notice to the community advising that the mosque would be pulled down on Friday.

The stand-off comes as China faces growing criticism for its crackdowns on religion and particularly its treatment of Muslims, amid allegations that the Government has detained hundreds of thousands of the Uighur Muslim minority group in so-called “re-education” camps.

Footage posted online this week showed a large crowd of Hui Muslims gathering at the Weizhou Grand Mosque in a rare protest against the government’s demolition plans.

‘Demolishing the mosque will set an example’

PHOTO: Stills from videos taken at the Weizhou Grand Mosque, posted to Twitter. Hui Muslims have been protesting government plans to demolish the mosque. (Twitter) 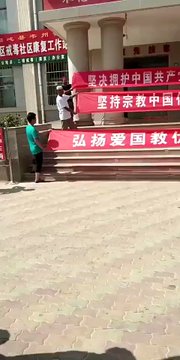 A lot of Hui Muslims protest against demolishing Weizhou mosque in front of local government of Ningxia Hui autonomous region.

In #CHINA , the authorities usually think all protests are unlawful, except those nationalist demonstration of government manned.#反清真运动

Officials in Ningxia have been removing elements of Islamic and Arabic architecture from the region’s buildings since earlier this year, in line with a government directive to make foreign religions more “Chinese in orientation.”

Many writing about the incident on Weibo, China’s equivalent to Twitter, expressed support for pulling down the mosque.

“[Demolishing the mosque] will set an example as a warning to other unapproved projects,” Mei Xinyu, a political columnist, said in one post.

“With Ningxia’s move against Islamisation and removing Chinese characteristics reaching the tough stage, we should overcome all obstacles and dismantle the unapproved construction.”

“We should mark the demolition as a milestone to bring order out of chaos.”

A document published in May by the local Chinese Communist Party Commission for Discipline Inspection said the Weizhou Grand Mosque had been carrying out illegal extensions since 2016.

The Commission said local party officials had failed to properly supervise the development, which it said was partly funded through foreign donations.

However in a post circulated on Chinese social media, a supporter of the mosque said he did not understand why authorities had taken so long to say anything if the mosque was such a problem.

“In the past two years, no authorities stood up and asked us to stop building works,” the anonymous post said.

“No doubts had been raised over permission for land use, and no one claimed it was an unapproved project.”

PHOTO: An image of the Weizhou Grand Mosque in China’s Ningxia Hui autonomous region. Hui Muslims have protested at the mosque after authorities said they were planning to demolish it. (Weibo)

While the demolition was supposed to begin on Friday, it appears officials in Ningxia backed down from their threat.

The South China Morning Post, citing local sources, reported plans to pull down the mosque have been delayed until a reconstruction plan can be agreed to.

‘You have to criticise yourself’

Kazakh Muslim Omir Bekali and other former detainees details how they had to disavow their Islamic beliefs, criticise themselves and give thanks to the ruling Communist Party.

A plan to remove several of the building’s domes and replace them with pagodas was rejected by worshippers, Reuters reported.

“If we sign, we are selling out our religious faith,” a Weizhou mosque supporter said in a note on messaging app WeChat that was seen by reporters, urging villagers not to sign on to the mosque rebuilding plan.

The Hui are the largest of the 10 Muslim minority groups within China, and speak a variation of Mandarin — the language spoken by China’s majority Han ethnic group.

James Leibold, an expert on China’s ethnic policy at La Trobe University, said the Hui have traditionally played “a kind of broker role” between party officials and other Muslim minority groups because of their common language.

“They’re a highly strategic and important ethnic group in China,” he said.

PHOTO: In this Nov. 4, 2017, file photo, a child rests near the entrance to the mosque where a banner in red reads “Love the party, Love the country” in the old city district of Kashgar in western China’s Xinjiang region. (AP: Ng Han Guan, File)

While Uighur Muslims living in the western frontier province of Xinjiang have faced increasing pressure in China in recent years, the Hui have largely flown under the radar.

But the increased suspicion of foreign religions in China — specifically Islam and Christianity — has seen attitudes towards the Hui begin to shift.

“Islam is viewed as a religion that lends itself to fanatical acts of belief and political violence,” Dr Leibold said.

“China witnessed that occurring in Xinjiang beginning in 2012, and recently in a mass stabbing in the train station in Kunming, and that concern about violent Islam is now creeping into the Hui areas.

“Like they’re doing in Xinjiang, [the party state] overacts, and sometimes that overreaction can really exacerbate the problem.”

The stand-off in Ningxia marks the latest in a series of events that have seen Beijing attempt to control various religions and religious practices.

Earlier this month, thousands of coffins were destroyed as authorities moved to roll out hard-line “burial free policy”, while back in April is was reported that Bibles were being pulled from bookstores.

Harmony: One of the Most Precious Elements in Chinese Traditional Culture

Can You Be Greater Than Your Suffering?

The Souls of China and Shanghai Faithful reviews