For years, the fiery band of activists pushing for democracy in China looked to Liu Xiaobo, the jailed Nobel Peace laureate, as a source of inspiration. They created social media groups devoted to his iconoclastic poetry. They held up his photos at rallies, demanding justice and transparency.

But Mr. Liu’s death last week of liver cancer, after a final, futile attempt by friends to bring about his release, has dealt a withering blow to the pro-democracy movement. Some say it is now at its weakest point since the Tiananmen Square crackdown in 1989.

“It’s a turning point,” said Yan Wenxin, a human rights lawyer in Beijing. “The feeling of powerlessness among activists has peaked.”

Under President Xi Jinping, the government has imprisoned dozens of lawyers, journalists and advocates and tightened controls over the internet. Now, the ruling Communist Party’s feverish attempts to erase Mr. Liu’s legacy have raised fears that Mr. Xi will intensify his campaign against activists pushing for ideas like freedom of speech and religion.

The authorities, wary of turning Mr. Liu into a martyr, have in recent days censored online tributes and arrested activists who have sought to publicly remember him.

The dearth of foreign leaders willing to criticize Mr. Xi publicly has added to a sense of despair and isolation among activists. Many say they feel abandoned by the United States in particular, and they worry that President Trump will prioritize trade with China at the expense of human rights.

“People are full of sorrow, anger and desperation,” said Zhao Hui, 48, a dissident writer who goes by the pen name Mo Zhixu. “We hope the democratic activists who still remain can keep the flame alive. But bringing about change to the bigger picture might be too much to ask.”

The passing of Mr. Liu, who preached peace and patience, has provoked debate about the best path toward democracy. Many activists argue that more forceful tactics are necessary to counter what they see as unrelenting government hostility. Some have pushed for mass protests, while a small number believe that violence is the only option, even if they do not endorse it outright.

“Some have turned to believe in violent revolution,” said Hu Jia, a prominent dissident who served more than three years in prison for his activism and still faces routine surveillance. “It makes people feel the door to a peaceful transition has closed.”

Mr. Liu’s allies remain incensed by the Chinese government’s handling of his case. Officials disclosed that Mr. Liu, 61, had advanced liver cancer only when it was too late to treat it, prompting accusations that his medical care was inadequate. The authorities have also prevented his wife, Liu Xia, an artist and activist, from speaking or traveling freely.

The scrutiny facing government critics is likely to grow even more suffocating in the months ahead.

The Communist Party will hold a leadership reshuffle this fall, at which Mr. Xi is expected to win another five-year term and appoint allies to key positions. In the run-up to the meeting, the party is tightening its grip on online communications and escalating pressure on critics.

Human rights advocates say that the party appears increasingly hostile toward dissent and intent on quashing even small-scale movements. Over the past two years, dozens of human rights lawyers have been jailed and accused of conspiring with foreign forces to carry out subversive plots. Mr. Xi’s government, wary of grass-roots activism, has also increased oversight of domestic and foreign nonprofit organizations.

Yaxue Cao, an activist who grew up in China but is now based in the United States, said Mr. Liu’s death was “the climax of a long and continuous stretch of ruthless elimination.” She recited a long list of critics who had been sidelined since Mr. Xi rose to power in 2012, which she said had led to a culture of fear and intimidation.

“The party has been working systematically to block the path forward,” she said. “A few hundred or a few thousand activists are nothing for the party.”

Advocates say they were startled that foreign leaders did not speak out more forcefully about the treatment of Mr. Liu. While American diplomats called on China to allow Mr. Liu to travel abroad for cancer treatment, Mr. Trump did not speak publicly about the case. 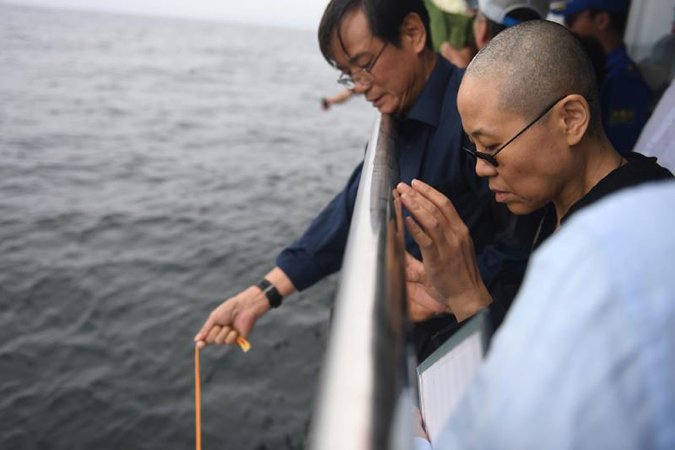 The Chinese authorities released this photo of Mr. Liu’s wife, Liu Xia, taken as his ashes were lowered into the sea last week. She has been prevented from speaking or traveling freely.CreditShenyang Municipal Information Office, via Agence France-Presse — Getty Images

“Western countries have adopted a policy of appeasement,” Mr. Hu said. “The Communist Party has the resources to whip whomever they want.”

The Chinese government has defended its treatment of Mr. Liu and accused foreign critics of meddling in its affairs.

While China has seemed less responsive to foreign pressure on human rights issues in recent years, several activists said they thought it was still important for world leaders to speak out.

“We hope the West can maintain its moral position,” Mr. Zhao said. “Even though the pressure is not as effective as it should be, it needs to be expressed.”

Despite the government’s efforts to limit dissent, some of Mr. Liu’s supporters say they have emerged more energized in the days since his death. They see hope in a middle class that is increasingly outspoken; grass-roots activists who are taking on issues as varied as pollution and forced demolitions of homes; and a generation of young advocates who have taken on causes like feminism and rights for gay, lesbian, bisexual and transgender citizens.

“How long can such an approach last before discontent boils over?” said Maya Wang, a researcher at Human Rights Watch in Hong Kong. “One only needs to look at the protests, particularly in the countryside, to see the enormous grievances there are out there.”

In the aftermath of Mr. Liu’s passing, his admirers have found ways around the government’s controls on speech to honor him. Several supporters uploaded photos of the ocean this week as a tribute to Mr. Liu, whose ashes were spread at sea.

Wu Qiang, a dissident intellectual, drove about 400 miles last week from Beijing to the northeastern city of Shenyang, where Mr. Liu was being treated, to be near him in his final days. Mr. Wu, 46, said Mr. Liu’s death had left many of his admirers with a desire to “turn sorrow into strength.”

“On one side is darkness; on the other side is hope,” he said. “We need to find a new way forward.”

More than 100 Chinese scientists have condemned the CRISPR baby experiment...

‘Organised cruelty’: who are the Uighurs and why does China want...